The secrets your printer knows about you

Home/Our Blogs/The secrets your printer knows about you

The secrets your printer knows about you 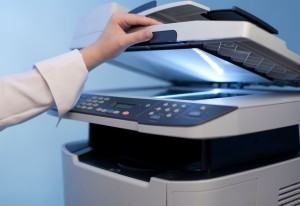 Try to imagine if you could pull up a report displaying everything you’ve printed, scanned or copied for the past 20 years. What do you think that would look like? What kind of sensitive information might be included?

According to a CBS News investigation, “nearly every digital copier built since 2002 [stores] an image of every document copied, scanned, or emailed by the machine.”

When was the last time you argued with your computer about some weird print spool error? Now you have another reason to get irritated with the printer, found in home and work offices alike. Your printer knows a lot of information about you and your business!

As Armen Keteyian described it for CBS News, your printer is “a digital time-bomb packed with highly-personal or sensitive data.”

In short, printer hard drives could be ideal targets for identity theft criminals.

Think back about that hypothetical report at the start. What sensitive information is included in the thousands of pages? Did you ever make a copy of your driver’s license to send for insurance or financial reasons? What about printing a page of information that includes your Social Security number? Have you ever sent your bank records through your printer in some way? What about printing off tax documents? Or scanning them in?

There’s likely a treasure trove of proprietary business information stashed away on that little hard drive!

Do a quick online search for used printers, and you’ll find plenty of ways to buy these, from Amazon to eBay to local dealers. Stop by a thrift shop or Goodwill and check out all of the printers on their aisles. You can even list your hardware for sale yourself through printer buy-back sites, eBay, Amazon, Craigslist or social media.

And wherever that printer ends up going, it takes its little hard drive of information with it.

Copiers are expensive equipment. Many businesses upgrade to new hardware and sell their old printers through used printer programs. Once purchased, the new owner has a machine with that precious hard drive on it.

Keteyian tells an intriguing story about investigating the information on used copiers he purchased for the CBS News Story. They bought four used machines from a warehouse in New Jersey. Did they find information on them? You bet! For starters, one of the machines still had a document on the copier glass! It was only something left behind by the Buffalo, N.Y., Police Sex Crimes Division. Oops.

After a short 30 minutes of ownership, they had pulled out the hard drives, scanned them with forensic software available for free on the internet — and downloaded “tens of thousands of documents in less than 12 hours.” That’s something. So what did they find? Here are some highlights (besides the paper document from the Sex Crimes folks):

Fortunately, some printers now include the protection of automatically erasing an image from the hard drive, but not every printer in every office across the globe is brand new, is it?

Most Americans remain unaware of the dangers of all of the data stored on printers. So spread the word! And next time you retire that not-so-trusty printer because it keeps falling off of the network, remember about its hard drive. Don’t let it walk out your office door with all of those secrets!